We’ll be travelling to our Christmas Party by….Plane

Christmas party season is upon us, and here at Logical we’ll be swapping the Bow ties and sequin show-stoppers for sun glasses and flip flops! The infamous Logical Christmas ‘do’ is creeping up on us, and we couldn’t feel more blessed and excited to jet off once again, this Friday. A study found that one in three of us regret something from the Christmas party, well why not do think logically and embarrass yourself abroad! 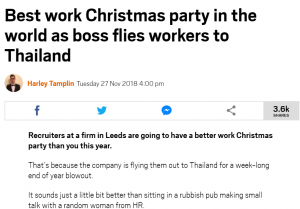 Logical in the tabloids
It’s not often you hear of an all-expenses paid for, overseas Christmas party, it’s that unheard of that the Metro wrote an article last year and described it as ‘The world’s best Christmas Party’ and indeed it was! The financial times have also recently been in contact to publish a further article about our 2019 Christmas get away.

The Trips that have gone down in History
For complete boasting purposes and because being rewarded helps make a job rewarding, lets list some of the places we’ve had the pleasure of going to on our incentive trips. Last Christmas we met up halfway with the Australian team in the home of Pad Thai that is Thailand! – by the looks of our trusty Directors face (above, right) there was a factor 50 draught and the buckets on Bangla Road were really taking their toll! To name a few hot spot destinations, we’ve also been to Ibiza (above left), Barcelona and Tomorrowland Festival.

Founder Rob Carlton believes one of the best ways to motivate and inspire people to be the best, is to have something to work towards, he loves to reward us for our hard work over the course of the year. Aka work hard, and you can party even harder! Some organisations will only take the individuals that met their personal targets, which is a very exclusive approach. At Logical we use a family orientated approach as everyone in the company is included in the trip. That’s thinking Logically!

This year’s Agenda
This year, it’s a double whammy, as our UK team are jetting off to the largest city in the Costa Del Sol- Malaga! Director of the Australian team, Gill Dumigan, is flying the Aus team out to their equivalent of Spain (swap the paella for nasi goreng)- Bali! If you want some winter sun envy, keep your eyes peeled as both teams are all boarding this Friday! Have you really been on holiday if you haven’t posted it on all forms of social media? Holiday content pending….