Will the current climate change our ways?

Today marks the 50th anniversary of world earth day, first established on 22nd April 1970 and since then the threats to our planet have only grown in severity. Today we celebrate world earth day during a global pandemic, where day to day activities have been put to a holt worldwide and the earth has been stripped of its added necessities’ such as cars and planes emptying our streets and skies.

The pandemic has come after a time of environmental emergency as in the last quarter of 2019 the Amazon Rainforest fires increased by 84% which raised alarming awareness of our climate crisis through a social media frenzy with celebrities such as Leonardo DiCaprio becoming an advocate for saving our planet. Then came the Australian bush fires as they spread at a rapid pace across several states, resulting in people worldwide making donations and raising awareness by getting #PrayForAustralia trending on social platforms. So, let us take the time to consider how we can keep our planet more sustainable when the play button is pressed on this global pause. 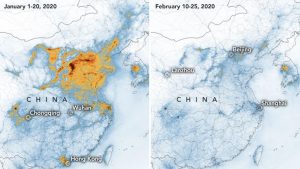 How is mother nature thanking us?
Back in February an analysis by the climate group Carbon Brief found as the pandemic seized hold to China’s economy and heavy industries were shut, emissions from the country plummeted by an astonishing 25% which is the same amount of carbon emissions that the UK produces in a whole year. Until now, global emissions have been reliably increasing by a few percent year on year. In early April, the Carbon Brief analysis estimated that globally this year, emissions could fall by 5.5 percent from 2019 stats. The 5.5 percent figure tops the 3 percent reduction in emissions that followed the 2009 recession, where similarly economies were slowed, and people travelled less. But emissions bounced right back as the economy recovered.

This is our chance to reinvent cities
If the streets are the cities veins, then the cars are the blood pumping through them- however they are a pathogen. With cars now locked up in garages, air quality around the world has gone through the roof, according to a report by the royal college of physicians (RCP) each year inhaling particles of air pollution around 29,000 people’s lives are cut short in the UK every year. Last month, researchers at Columbia University calculated that carbon monoxide emissions in one of the busiest cities in the world, New York City which not surprisingly mostly comes from vehicles -fell by 50%.
We’re also beginning to get a taste of what our cities looked like if they were designed for people and not cars, cities in America such as Oakland, California and Boston have all shut their roads completely for cars meaning people can walk and bike safely without worrying about cars which if this was happening pre-covid would be boosting public health.

CSR is a long-term strategy
With more free time on our hand’s consumers are watching companies closely, this is a crucial time for companies to take up social responsibility. As Covid-19 has affected the lives of billions, people are now looking to businesses for support. According to a poll conducted on a recent Association of National Advertisers webinar, 20% of brand marketers have increased CSR spending as a response to the epidemic.
If you are a salesman or a BDM, you may not be hustling to maintain your day to day processes now because your products and services do not have the same sort of demand as they usually would. Do not ignore what is right in front of you and use the time that would normally be used to carry out these tasks and develop strategies that will help the business thrive in new market conditions. Building your organisation to be more sustainable makes your business become more efficient, improves your brands value and reputation, provides a platform for innovation, attracts and retains staff as 75% of millennials say they would take a pay cut to work for a socially responsible organisation and lastly strengthens your stakeholder relations.

With climate no longer being the crisis, climate issues have been crowded off the agenda – but how can we use this time to ensure mother nature can finally start thanking us when the 100th year earth day anniversary comes along? Maybe our sudden clearer skies don’t have to be temporary after all…