“It is in times of crisis that great leaders emerge”

It’s Wednesday which means we’re talking about women! This would typically be related to revolutionary women in technology – however given the current climate the efforts of female leaders around the world during this pandemic cannot go unnoticed. As of yesterday, New Zealand officially announced that they’ve stopped the wide spread of the virus and the tough lock down restrictions are scheduled to be eased. New Zealand has their premier Jacinda Ardern along with the rest of the government to thank, Arden has truly shown assertive leadership skills as the country have recorded as little as 18 deaths since the first infections started showing in early March. Ardern imposed a 14-day quarantine on anyone entering the country on 14th March and implemented a strict lock down two weeks later, when fewer than 150 people had been infected and none had died. The UK went into lock down 37 days ago on 23rd March and the first cases in the UK were at the end of January so it’s safe to say we acted a lot slower on our lock down than countries like New Zealand.

Whilst plenty of countries with male leaders such as Vietnam, the Czech Republic, Greece and Australia have dealt with corona virus effectively – few countries with female leaders have dealt with the corona virus crisis badly and this should be praised. Ardern, 39, has shown the world that true leadership is sympathy, love and integrity. She has been seen as holding her nations hands through the lock down, delivering personal, empathetic “stay home, save lives” video messages from her couch and communicating daily through non-antagonistic press conferences and intimate Facebook Live videos, which in true modern style is her favourite medium. Her insistence on saving lives whilst keeping her kindness – urged New Zealanders to look after their neighbours, take care of the vulnerable, and make sacrifices for the greater good with a strong emphasis on shared responsibility which has united the country and won her many fans not just from New Zealand but from all over the globe.

Public trust in Arden’s labour government is greater than 80%, whereas in the UK less than two in five people trust our government to get us through this crisis in the most effective manner as a survey by the Opinium for the observer found only 36% of UK residents have trust in our government according to the opinion poll.

Being clear and concise 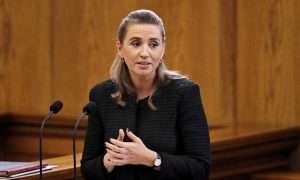 In Denmark, Mette Frederiksen, acted equally firmly, closing the Scandinavian country’s borders as early as 13th March, and a few days later all kindergartens, schools and universities were shut, and gatherings of more than 10 people were banned. That sharp decisiveness appears to have spare Denmark the worst of the pandemic, with fewer than 8,000 confirmed cases and 370 deaths. Frederiksen’s no-punches-pulled speeches and clear instructions to the nation have been widely praised. The country’s youngest-ever prime minister, whose approval ratings have doubled to more than 80%, has now begun easing its lock down. Unlike most other PM’s she even managed to show a fun side, posting a clip on Facebook of herself doing the dishes while singing along to the 1980’s Danish pop stars Dodo and the Dodos during the nation’s weekly TV lock down singalong – the British version would probably Boris Johnson singing along to the Spice Girls, which probably would have gone down like a led balloon with the British public!

Finland’s PM, Sanna Marin – who last year became the world’s youngest head of government at 34 years old – also moved decisively to impose a strict lock down, including a ban on all non-essential travel in and out of the Helsinki region. This has helped her country contain the spread of the virus to just 4,000 cases and 140 deaths.

Iceland’s PM Katrín Jakobsdóttir, has offered free testing to all citizens, not only those with symptoms, and has recorded 1,800 cases and 10 deaths. Some 12% of the population has taken up the offer, and a tracing system has meant the country has not had to close schools.

Female leaders such as these are modern day pioneers for breaking the stereotype that people in power need to a certain age or gender. When the world gets back to normality, these leaders should be introduced to young people through education as role models as they have achieved greatness through staying true to who they are and their values. Jacinda Ardern, the youngest PM of the last 150 years, the first PM to deal with a terrorist attack, volcanic eruption, climate change reforms and a pandemic all in 1 term whilst carrying her now new born child – these are female leaders of today that should be the role models of tomorrow.