Not all hero’s wear capes

One in ten nursing jobs in the UK are unfilled, two obvious solutions to the staffing crisis for nursing would be to train more nurses and retain more staff but how can we expect people to want to join the profession if they’re working long hours to get underpaid?

This week is international nursing week, and in the current circumstances the efforts of nurses globally who risk their lives daily have shown how truly selfless you have to be. It is not breaking news here in the UK that there is a nursing crisis due to nurses getting vastly underpaid in comparison to how much patients lives rely on them and how many hours they work. Nursing is not just a job it is a vocation as what you do day to day transforms people’s lives. One of the reasons children may not aspire to be a nurse is because of how the role can tug on your emotional heart strings, however this doesn’t take away from the fact the job is highly rewarding and a challenging career in which you can really thrive. The under staffing crisis has really been highlighted during COVID-19 as students have been sent to work early on the front line with some not even getting paid and retired nurses coming back to work because of the high demand. 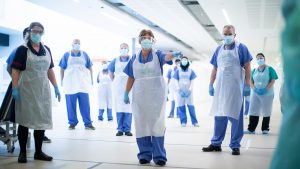 I recently read a quote stating “If doctors are the rock stars then the nurses are the crew”- apart from the difference in pay this could not be more incorrect. At the beginning of this year a study conducted by the royal college of nursing, found the old-fashioned view that caring for others is a ‘feminine characteristic’ continues to be apparent in our British society even today – which has led to the restraining of nurses’ wages and working conditions for many generations.

Researchers warned the nursing shortage will continue to get worse if pay for nurses is not improved. While one in nine nursing jobs are left empty, a third of the profession are due to retire by 2026 – i.e. we are in need of a next generation of nurses. The report, discovered nurses routinely have to turn their hand to responsibilities which would have previously been the role of doctors, despite earning an average of £15.42 per hour – less than a third of the amount earned by doctors and dentists. Although nine out of ten nurses in the UK are women, they take home on average 17 per cent less than men in similar roles every week. Female nurses also hold less than a third of senior positions.

It is the year of 2020 and there is still a gender bias and pay gap with nurses being underpaid whilst risking their lives on a daily basis and even more so during Covid-19. Over 100 NHS workers have sadly died on the front line due to the virus. The country should see this as a lesson and provide nurses with the pay and support that they deserve. Thank you to our Nurses and NHS workers on the frontline- you are our superhero’s.